Discuss official releases and re-issues. The only links allowed here are to the Beatles YouTube channel or other band-sanctioned platforms.
Post Reply
117 posts

Thanks to ziggy for the inspiration from his post here: viewtopic.php?f=20&t=4158 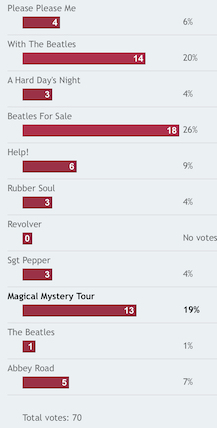 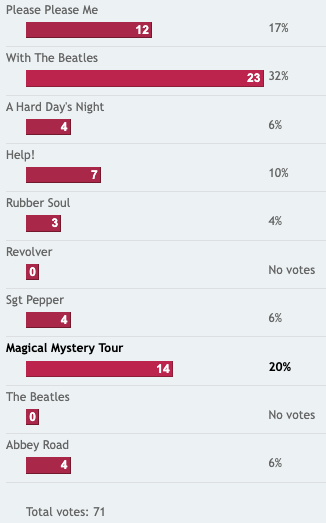 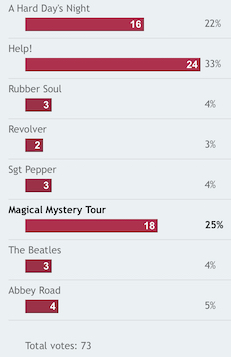 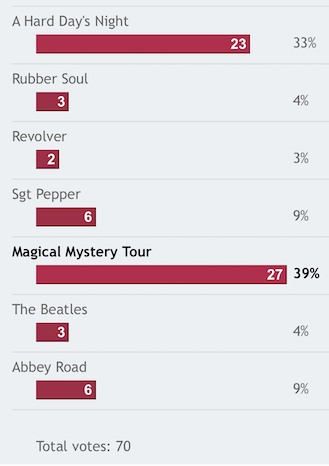 First one to vote! My least favourite has to be Beatles For Sale. Has 8 Days A Week and Rock And Roll Music but not much else.
My Discord:https://discord.gg/72m2cKXY5w
Top

This is going to be difficult. A bit like asking who your least favourite child is.
Top

Voted for With The Beatles. I think it has the same amount of good songs as Yellow Submarine though.
Top 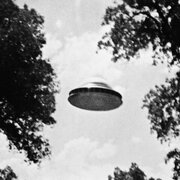 This is extremely difficult. I have a cd player in my car (which I still find amazing) and one of my cd books are the 2009 remasters including Past Masters but adding "Free As A Bird" and "Real Love" at the end. Every one of the lesser loved albums like anything pre-Rubber Soul, Yellow Submarine or Let It Be still bring back loads of memories and it's fun to play them in chronological order. I have some SONGS that I don't enjoy as much as others (for example "What Goes On", "All Together Now", "When I'm 64", etc.) but the Beatles were an amazing example of an ALBUM band. But, heck, I listened to Lord Reith's latest BBC set in order whenever driving for a couple of months and I enjoyed it immensely. It's a great juxtaposition listening to those "ancient" sessions while puttering around a modern city with some serious sun.

So, I can only go with Let It Be because it's the only record I bought in my early discovery days (early 1980's) that I almost felt "ripped off" for buying. To this day, I just can't get into songs like "Two Of Us" (or "Don't Let Me Down" from those same sessions). If I really picked my least favorite Beatles album growing up, it would undoubtedly be between Beatles '65 and Beatles VI. Those mixes of the "I Feel Fine"/"She's A Woman" on the former are atrocious. But those are some of the record that us US buyers grew up with.

For the record, I have always loved the orchestral side 2 of Yellow Submarine and recently enjoyed hearing it again when we watched the blu-ray recently. Some of George Martin's best orchestral work.
Fawwt!
Top

I appreciate the nod, WS, thanks for setting up this poll.

YS because it's the most short (1 Beatles Side and only 4 New Songs) but I enjoy it anyway, the George Martin score is Great too, the movie is Fab
David
Top

I can’t bring myself to vote. Can I write in “A Collection of Beatles Oldies?”

If you really noticed the battlefield scene in HELP, when Eleanor Bronn takes the tape machine underground...I used to make everyone be quiet. I knew exactly what I was hearing. I thought She's A Woman sounded flat and awkward in the movie. It sounds incorrect to hear HELP without the James Bond intro. I would thank Dave Dexter Jr. if I could. In the U.S.A., Beatlemania was an eight year rush. There was nothing cooler. They weren't a band, as much as they were our personal spokesmen. Representing everyone. Especially youth! Dave Dexter made that as intense as possible. He did for The Beatles what Carrol Shelby did for Ford's Mustang. Only he was much better at his job than Shelby. Don't forget Shelby also put Ford's V-8 engines into the last remnants of the A/C car company and thus began the fierce Cobra Roadsters that are likely to be driven by Beatles Fans all over the planet. Shelby also designed and built the GT40 which went to Europe and dominated Ferrari, Lamborghini, Porsche, Jaguar, Mercedes, Maserati, Aston-Martin, Alfa-Romeo, Etcetera! But, Dexter made the Beatles just as thrilling as driving for Shelby. I grew up in Lompoc, California. By 1967, there were Beatles records AND Mattel's Hot Wheels in every house I ever went into. In the mid 80s, I lived in the San Fernando Valley. I used to stop at ANY yard sale that I had time for. It always, went like this:
I would double park if it was residential streets. Leave it running and leave the driver's door open.
"Hi, what are you looking for?"
Beatles records, books posters and Hot Wheels with redline wheels!
"Oh, sorry, man. I ain't got anything like that".
Yes, you do. Go get them please.
Then, the guy would go, "Honey?" and the wives were always hip. "I think Johnny left his stuff in the closet. Hang on a second"
And, usually in less than 5 minutes...there was loot to buy. Incredible things. What other country, used a photo shoot at Tittenhurst Park and 5 old singles to pretend that The Beatles had a new album. It was pure denial. It wasn't even Dexter by then. But, it got us through another year. Then, RAM made it seem like it was still possible...And finally, the Dexterized Youth ended in a most unbelievable way. My sister's friend had procured a new copy of Sticky Fingers. They were mystified by the zipper that went up and down...and that the gatefold was glued shut!?!?! this HAD to be wrong! By the time Brown Sugar and SWAY were finished...I remember telling them...RIGHT THEN..."well, that seals it! The Beatles aren't ever getting back together". They might have realized the heartbreak I was trying to enlighten them with...but they were so worried about the cover. "If that thing is glued shut, it's a factory flaw! Tear it open as carefully as..." RIP!!!
That was the most bummed out I've ever seen my sister. Both girls were unable to hear the music. "He's wearing UNDERWEAR? WHAT the f*ck? Who the f*ck is Andy Warhol?"
He is a distant relative of Fruit Of The Loom!
Then the Wings Wild Life album made us wonder if it had all been a dream!
"Look Sherrie, the zipper goes up and down so you can look inside those LEVIS"
"Did you know that John And Yoko made an album with a naked front and back cover?"
"Go get that book!" (Lennon Remembers) I would fetch the paperback. "Show me that picture of John's ass naked"
Then my mom would say, do you have to talk like that?
"He's got a nice ass. I want to f*ck him"
The Beatles had definitely broken up, for good...
KC

I voted for Let It Be! Even though I love the strings and the choir!
Top
Post Reply
117 posts