With kind permission from another member here (magoocus) I offer these vinyl rips he did a few years back. 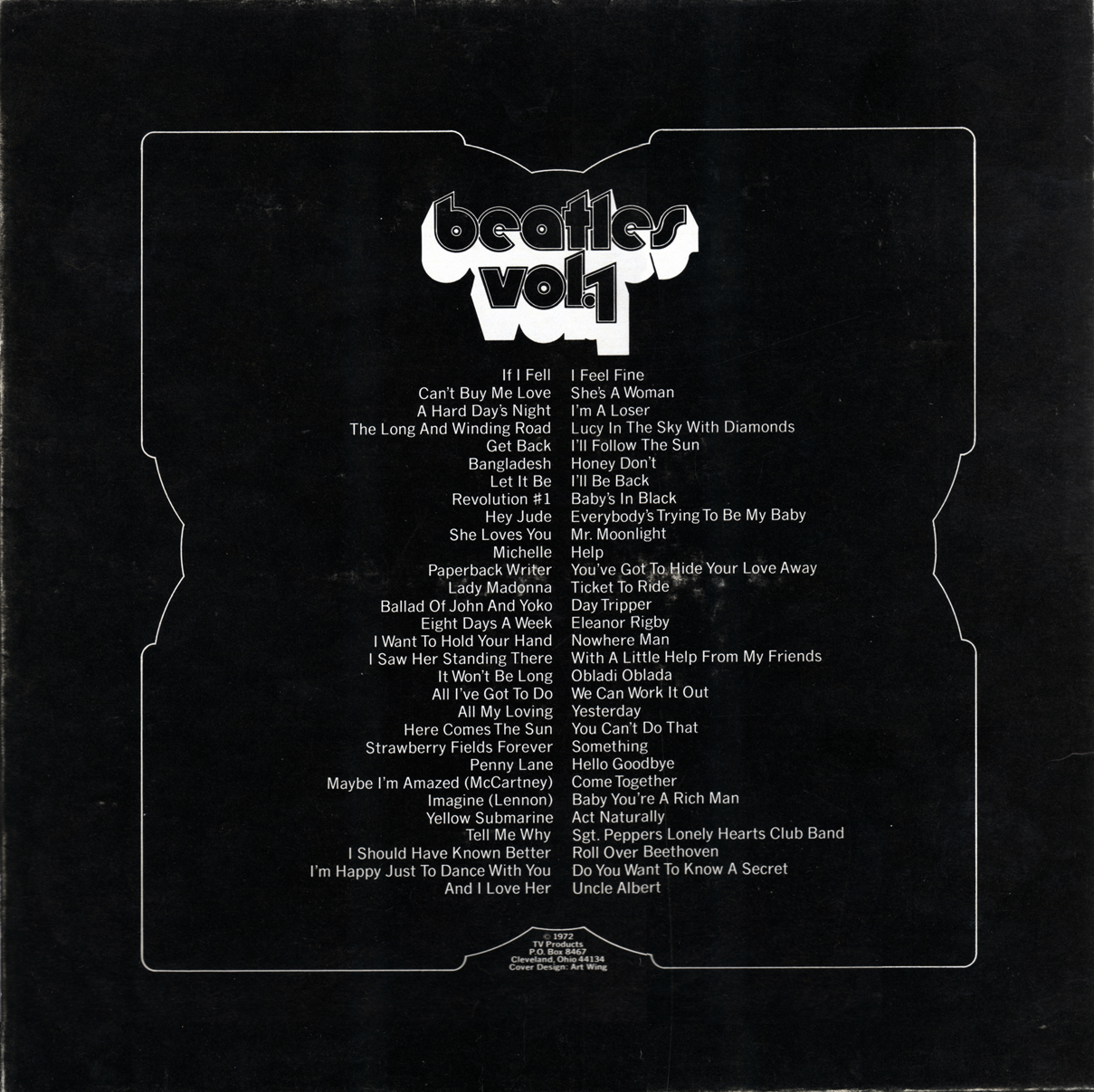 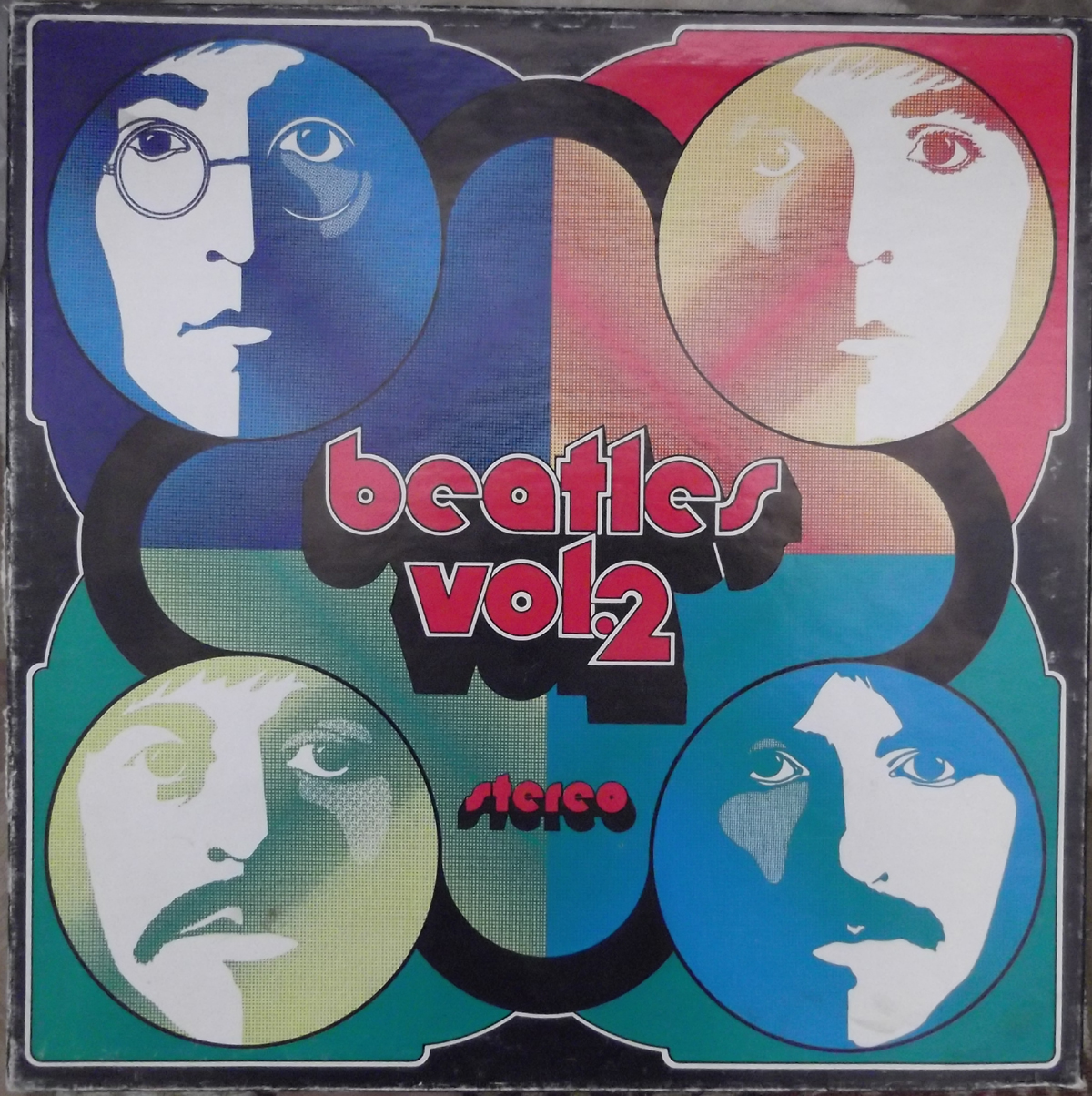 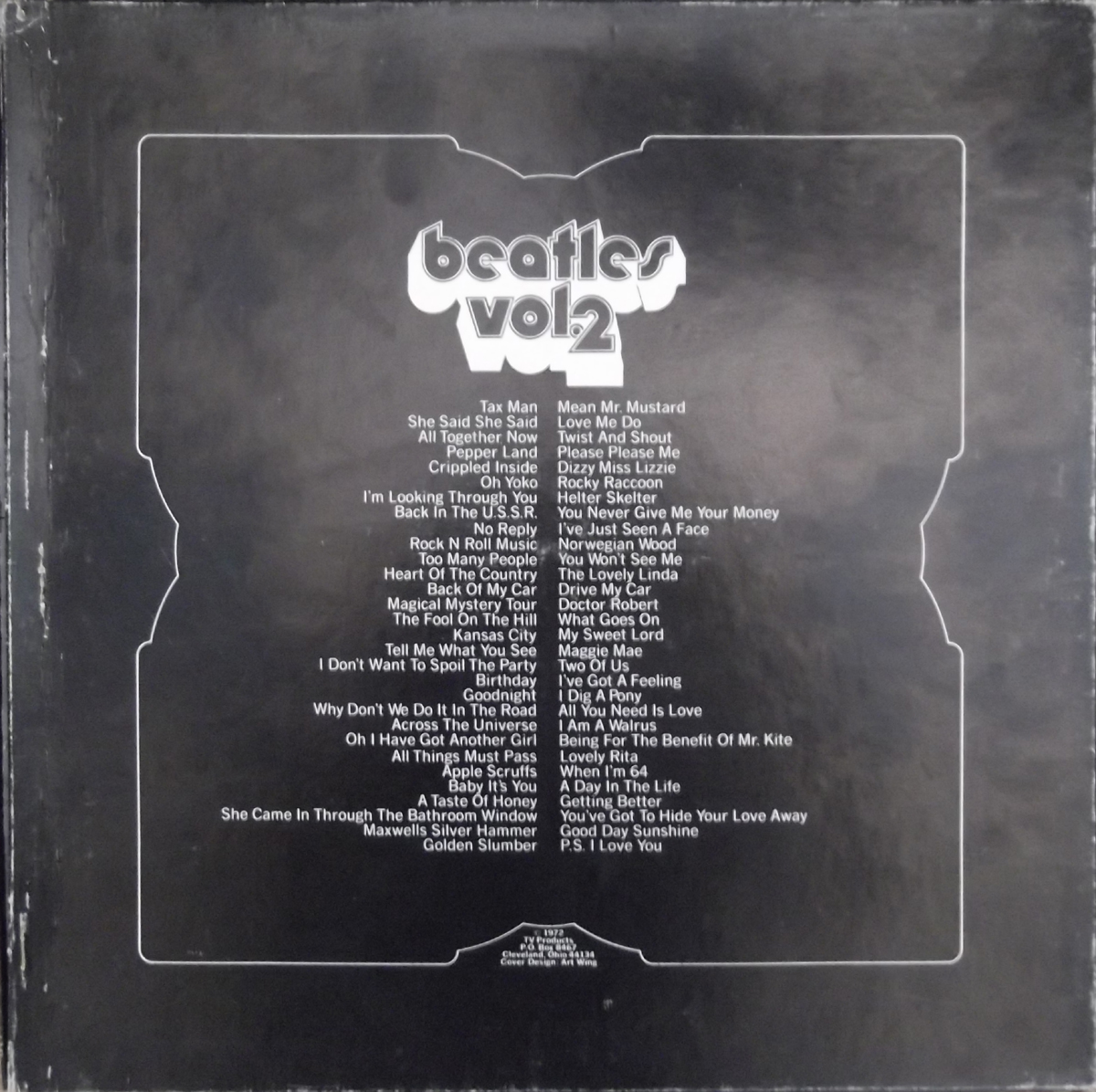 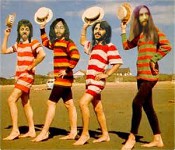 Thank you both!
Top

Thanks Mrbeatleg, and Magoocus of course. Here's a bit of what was said after the albums came out:

WHAT A THING TO DO: The Alpha Omega Incident
In 1972 a small company in New Jersey brazenly flaunted copyright statutes and sold a huge four-disc set of well-known Beatles songs – even advertising the collection on television and radio.
The collection was being sold by a company called Audiotape Inc. and was titled The Beatles Alpha Omega — and it was quite the curiosity. Containing 4 LPs (and also available on 8-track), it collected 60 Beatles songs including several current (at the time) Beatles solo tracks. The tracks were arranged more or less in alphabetical order (some may have been shuffled around due to time concerns), and edited haphazardly; Sgt. Pepper’s Lonely Hearts Club Band fades out just before the “Billy Shears” introduction on With A Little Help From My Friends, which appeared on a separate disc.
The recordings were all sourced from American Capitol LPs featuring the Dave Dexter, Jr. edits found exclusively on those albums – compression, bass reduction, and additional reverb. Given that those Capitol masters were edits of second, third, and even fourth generation reels from EMI, one can imagine the quality of the recordings on The Beatles Alpha Omega.

The Beatles Alpha Omega
The set was advertised for $13.95 and the commercial guaranteed delivery. It was amazing price for such a huge amount of music, but as Audiotape, Inc. wasn’t paying royalties it was easy to sell so cheap.
The copyright question
Prior to 1972, sound recordings were not subject to federal copyright in the United States; they were, instead, subject to various applicable state torts and statutes. The Sound Recording Amendment of 1971 extended federal copyright to recordings fixed on or after February 15, 1972 (the effective date of the act), and declared that recordings fixed before that date would remain subject to state or common law copyright. Those statutes as they existed in New Jersey, where Audiotape, Inc. was based, were lax compared to other areas, and restricting the sale of the set to mail order ensured they could continue to hide behind the pirate-friendly laws. The federal law was basically untested and being that there was no career-spanning Beatles compilation on the market (official or not), The Beatles Alpha Omega tested the boundaries of the new laws as it met demand for a product people wanted.
The fact that this set was available in such a manner is amazing. Put in the context of today’s copyright laws, try to picture a television commercial for a torrent site offering downloads of Beatles 1 and one gets an idea how audacious such marketing really is!
Volume 2 and…Volume 2?

The Beatles Alpha Omega Vol. 2
The set was apparently successful enough to warrant 2 more volumes – Volume 2 which featured an additional 4 LPs of music, and another collection also confusingly titled Volume 2 but featuring a track listing different from either volume or what was advertised on TV.

Variations
Both Audiotape, Inc. and Cincinnati company TV Products were manufacturing the sets and the releases and reprints were hardly coordinated, leading to a number of variations:

The Beatles and Allen Klein respond
If there was any question as to how the Beatles and Apple would respond to Alpha Omega it was answered in February when Beatles manager Allen Klein filed a lawsuit on behalf of George Harrison, Capitol Records, and Apple Records against Audio Tapes, Inc. and ABC and various local affiliates who aired the commercials for $15 million in damages and the end to sales and distribution of the set. Those affiliates were removed from the suit as they agreed to stop airing the ads. The case still appears in court records but the documents attached to it are missing, so it is unknown how the case was settled.
Interestingly, the suit claimed that the Beatles collectively earned $19 million in royalties between September, 1969 and the filing of the suit on February 16, 1973.
The success of The Beatles Alpha Omega helped identify a market for a Beatles career retrospective, and just a year later EMI issued the double LPs 1962-1966 and 1967-1970. Ads for the collection made regular mention that they were “the only authorized collections of the group’s music” as did inserts included with the albums and promotional posters appearing in stores.
Copies of The Beatles Alpha Omega have popped up in recent years, and ads for CD releases later appeared in the fan magazine Beatlefan and featured “needle drop” transfers (copy of a copy of a copy of a copy!) of the vinyl in very poor quality.
Top

I have a few variations of these in my collection 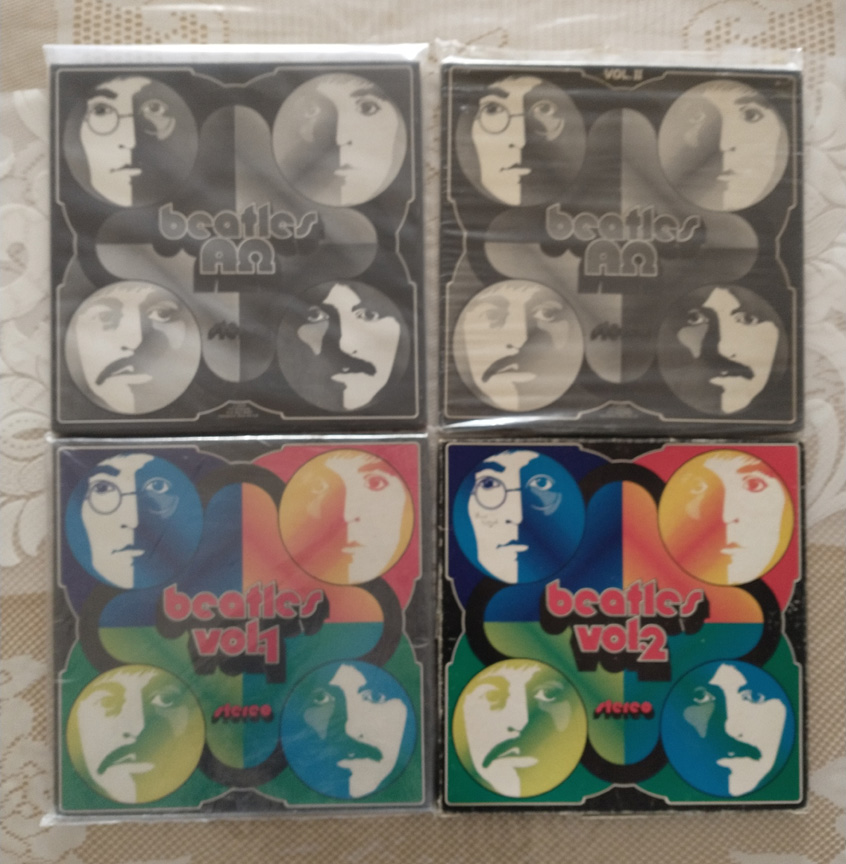 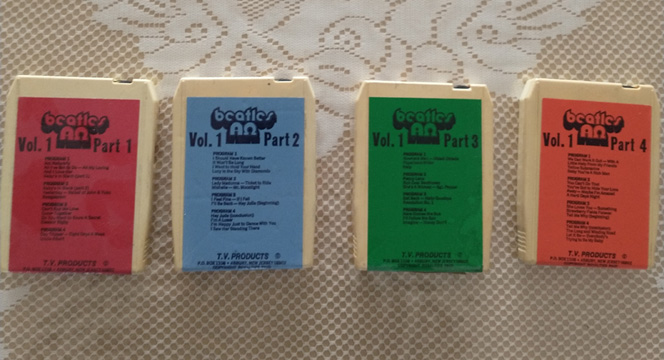 You're missing the CD's Tom? those are rare also there is a 4 CD's BOXSET but the material is different

As mentioned in the online clip in this thread, the novelty of the alpha-omega releases is that they led to the release of the Red and Blue albums. The sad thing about alpha-omega is that they are horrid. Pirated Beatles tunes made from needle-drops. I'm so getting these, make no mistake. And I have a vinyl copy myself, I think it may be the second version of Vol. II. I bought it at Amoeba in Hollywood. But I never listen to it. Those who have the original vinyl releases have some really cool museum pieces for sure.

My Beatle odyssey began when I was but a couple years old. My parents were listening to the Help album. I was hooked then. I've loved The Beatles my whole lives. When I was old enough to check records out of the library, my first choices were Yellow Submarine and The Blue Album. My first acquisitions were from my next door neighbors who were giving away some of their 45's. So I got I Am The Walrus/Hello Goodbye, Yesterday/Act Naturally, All You Need Is Love/Baby You're A Rich Man, and Mother/Why. My next door neighbor was a full-fledged member of the Wrecking Crew and had earned his nut by playing keyboards on Good Vibrations, California Girls, etc. My first Beatles purchase was Hey Jude, followed by The Red Album and Abbey Road. The Red Album had an insert that listed all the Beatles' singles, albums, solo works to that date. And my collection expanded based on that list.

I recall seeing the Alpha-Omega collections in my local record store, even though they were a mail-in order; the record store had them, too....behind the counter if anyone was interested. I should have got them then. But I was but 9 years old at the time.
Top

A nice collection Mrbeatleg, thanks for the pictures !